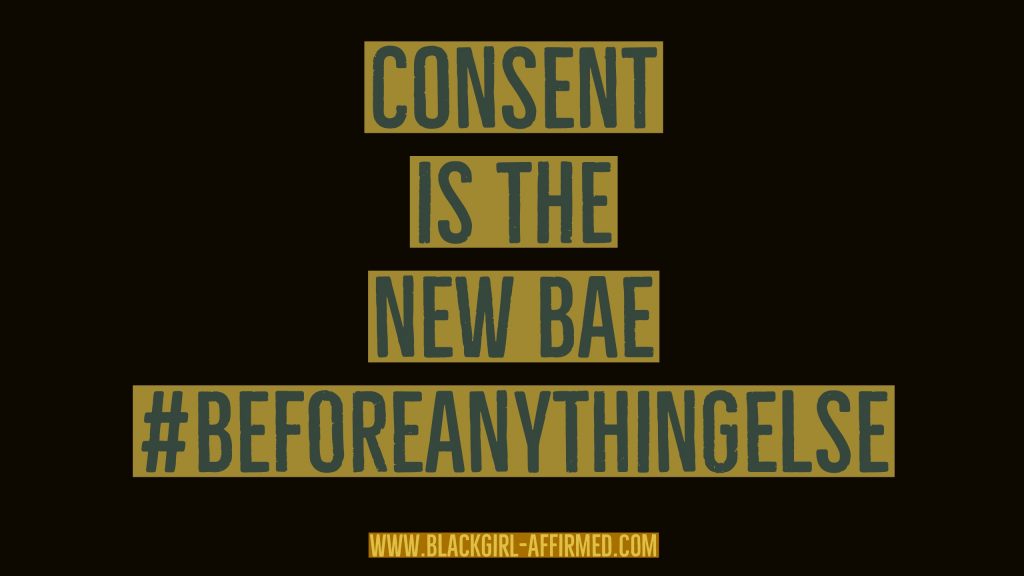 Recently comedian and actor Aziz Ansari came under fire for his behavior during a sexual encounter with a young lady last year. The story has been added to the #MeToo narrative and discussion surrounding sexual assault and violation. However, the controversy surrounding what happened and who is considered the victim has shed light on what is considered as sexual consent. The account of events was published on the site Babe.net.

So here is what had happened: Last year a young lady named “Grace” went on a date with Ansari that ended at his home. It’s there that things got dicey and Ansari’s behavior became “creepy”. At his apartment, the two of them engaged in kissing and oral sex. Grace says from the very beginning she felt uncomfortable and uneasy with how quickly things had escalated. Even after what Grace described as giving clear non-verbal cues about her comfortability, Ansari wouldn’t back down. She mentioned he was aggressively kissing her, kept sticking his fingers down her throat, asking where she wanted to be fucked and even bent her over in front of a mirror and pushed his penis against her butt. Through it all, Grace accounts that she was uncomfortable and felt pressure to continue these acts. For example, at one point she tells him “I don’t want to feel forced because then I’ll hate you, and I’d rather not hate you.”

He agreed that he didn’t want her to feel forced and offered for them to “chill” on the couch. Moments later, he gestures to his penis and Grace begins to give him oral. Now again, keep in mind that throughout this whole encounter, Grace is still feeling uneasy and pressured to continue. Eventually, she had enough, calls for a car home and leaves. This whole time Ansari is impervious to Grace’s annoyance and comfortability. Obviously because the next day he texts her, saying he had a good time. She responded that she didn’t.

“Last night might’ve been fun for you, but it wasn’t for me,” Grace responded. “You ignored clear non-verbal cues; you kept going with advances.” “I’m so sad to hear this,” he responded. “Clearly, I misread things in the moment and I’m truly sorry.”

This post is not about shaming or blaming. This situation could easily happen to anyone. I know I have personally had a sexual encounter where I was not wanting it to escalate to the point it did but I went along with it because I felt pressured (self-imposed) and I didn’t want to be labeled a tease. I more so want to shed a light and forcefully remind you ladies that you are the only agent responsible for your body. Even if you are at the point of penetration, if at any point in time you don’t feel comfortable, you have every right to stop all activity, tell your partner and remove yourself from the situation.

It’s easy to say that Grace was stupid and she should have flat out said “no” or “stop it” at any time. But let’s keep in mind that dominance is not always based on physical power over the victim. Often times it’s an emotional dominance that keeps the victim immobile. Here is a big TV star engaging with a young and probably inexperienced girl. Naturally, she will feel intimidation and pressure. Grace states she was in complete shock over Ansari’s behavior and that she was unable to really react in the moment.

This is all understandable. But I urge you ladies, if you are in charge of your full faculties and not being physically restrained, remove yourself. Don’t be afraid of being called a tease or whatever else lame things men say to women to guilt them into sex. Your body is not for the consumption of men. Sex is not an act in which men take and you “give it up”. Pleasurable sex is supposed to be for every party involved.

I truly believed that Ansari took full advantage of this young lady and even though her signals might have been contradictory, I am sure he could tell that she was not fully engaged in their encounter. It’s time for men to evolve emotionally and start thinking about other people besides themselves. When it comes to sexual intimacy, we all need to be better educated. When we are taught about consent and intimacy in the act of sex, we learn to make communication a part of the action because we when fail to stay in tune with our partner’s needs, we step into the risk of sexual violation.

What do you think about this situation? Do you believe Grace was violated? Is consent only considered to be a verbal affirmative yes?