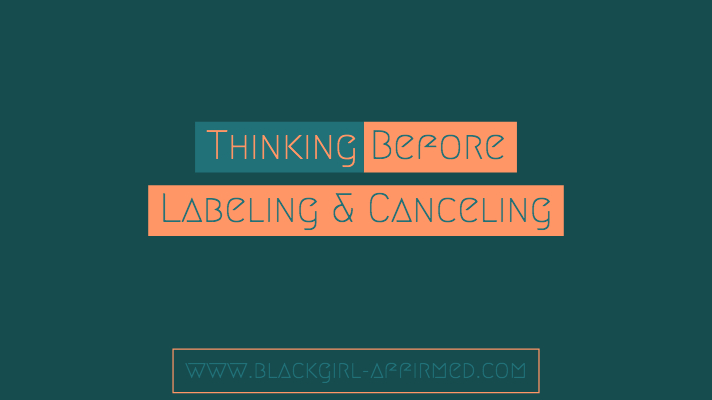 In the post “Practicing Mindfulness Through Prayer”, I wrote about the importance of being more open and present in our relationships and how being more mindful can lead to better intimacy and interconnectedness with those around us. Managing relationships can be difficult but as I mentioned in that same post, it’s important to maintain some of the folks in our lives rather than labeling them as toxic and eradicating them.

I believe in angels guiding and protecting us in either a spiritual or physical form. On the flip side, I also believe that some people/things we encounter in our lives are direct assignments of evil and demonic presence to wreak havoc in our lives. But more times than not, people are problematic because they are human. People are more than the sum parts of their wrongdoings.

Labeling someone as toxic without a comprehensive look at their behavior is dangerous to do. It’s part of the reason why cancel culture is so problematic. Just because someone offends us with their words or actions it doesn’t automatically constitute cancellation.

When someone does or says something problematic towards us then it’s important to take a step back and assess the situation. Sometimes there is room for a conversation and it is better to call a person in than to call them out. Communicating and educating them on how they hurt you is important. Most of the time people aren’t aware that they did anything wrong.

It’s easier to take this approach with people you love and care about it but I dare you to take this same approach with a coworker or a stranger who may offend you. You will know the moments in which someone is being plain nasty and rude and the moments when someone’s ignorance is genuinely based on their limited experience and knowledge of being in proximity to “otherness”. Don’t scoff or be above reproach to the idea of schoolin’ someone.

Sometimes we have to give people space and then reapproach. After all is said and done then observe future behavior and how they’ve applied the knowledge you’ve shared. If you see corrective behavior, then a relationship can continue to grow. If not then you can and should consider the initiation of canceling them. You can’t forgive people who don’t want to be forgiven.

Chimadada Adichie said, “Think of people as people, not as abstractions who have to conform to bloodless logic but as people — fragile, imperfect, with prides that can be wounded and hearts that can be touched… I have learned from literature that we humans are flawed, all of us are flawed, but even while we are flawed, we are capable of enduring goodness.”

Overall, I think we have to see the humanity in people and extend grace to people, especially for those asking for it.