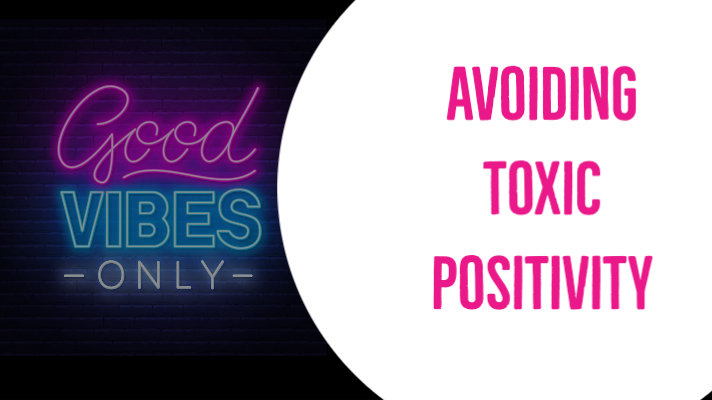 Everyone puts up a front at some point in their lives. Whether on social media, with friends and family or on their job. Very rarely are people 100% themselves at all times. It’s ingrained in our psyche and our culture to present a very polished version of ourselves to the world. Polished in appearance and in attitude. It’s arguably the only version of ourselves that many people want to see.

In photo editing, we understand how filters work and we have gotten pretty good at noticing when a photo has been enhanced. But what we’re not so good at noticing or acknowledging is the filter folks put on their mental health and overall well being, especially on social media.

Toxic positivity is the overgeneralization of a happy and optimistic disposition in all situations. It’s portraying yourself as positive and happy even if that may not be factual. It is also the act of encouraging yourself and others to be positive while ignoring or invalidating other feelings. It’s actively pushing away or ignoring negative or triggering feelings, and putting a band-aid of positivity over it. The problem with toxic positivity is that it doesn’t correct or change the mindset or attitude. It represses and buries feelings that keep you from true breakthrough.

Suppressing and avoiding your emotions is never a good thing. By doing so, you’re actually on a slippery slope to exasperating your problem and making it bigger. Unprocessed emotions fester and put you in a perpetual cycle of telling yourself to not pay attention to your feelings, thus you’re unable to navigate them and learn how to respond to them effectively. I don’t care how much you try, you can’t program yourself to only feel happiness. You need to be able to recognize and acknowledge fear, anxiousness, sadness, grief, worry, and a host of other emotions so that you can effectively and healthily process them when you encounter them again. And trust me, you will encounter these feelings again.

12 Dear friends, do not be surprised at the fiery ordeal that has come on you to test you, as though something strange were happening to you. 13 But rejoice inasmuch as you participate in the sufferings of Christ, so that you may be overjoyed when his glory is revealed.

Lastly, when you push atoxic positivity agenda it makes you unapproachable and unrelatable.  People will less likely interact or confide in you on any real level if all your emotions are perceived as happy. It’s difficult to build intimacy with someone if you can’t be vulnerable with them and share emotions other than happiness. You can inadvertently shame others for feeling bad about their situations. Instead, you’ll want to support and validate other’s feelings.

Releasing difficult emotions and thoughts in a healthy way is better than ignoring them. Try not to think of your emotions as neither good or bad. Instead, acknowledge and validate all emotions so that you can better understand yourself and others.