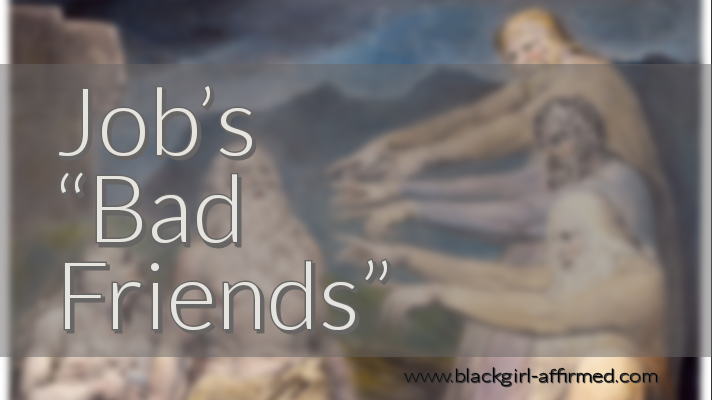 For the past couple of years, I have been doing a character study on Job in the Bible, and one of the most revealing things I’ve encountered during my initial reading was how supportive Job’s friends were. You always hear the context that they were “bad friends”. That’s why it’s imperative to read information for yourself. But in my opinion, Job’s friends were not bad, they were just being people. In fact, their behavior resembled friends I know or even have been myself.

When Job was in the thick of his test from God, his friends immediately went to be by his side and stayed for several days. They empathized with him by weeping aloud, tearing their robes and sprinkling dust on their heads. They were legit there for their friend.

I do believe that without malice they tried their best to console Job. However, they’d assumed Job’s troubles were due to an unconfessed sin of disobedience and they insinuated that he wasn’t as righteous as he professed. Their logic was based on their limited understanding of God. So in their attempts to console Job, they misinterpreted events and misrepresented God.

In their defense, their logic wasn’t that off based. People condemn one another in this way all the time. It isn’t far fetched to believe that someone’s difficult experience may be a direct result of their own doing or a direct consequence and/or punishment from God. From a very early age we are taught actions have consequences. There are stories told in the Bible in which God issues direct punishment from disobedience.

One of the tenants of friendship is “always keeping it real” with one another. And in essence real friends should be truth bearers in our lives but keeping it real doesn’t always mean voicing an opinion. Friends are flawed human beings, just like everyone else. Their “truth telling” ain’t always true. A lot of well-meaning folks can speak ignorance over your life.

We can all take a lesson from this relationship. When our friends are going through a challenging time, the best thing we can do is support by praying with and for them. And, by encouraging them to endure faithfully. We should be slow to pass judgement and quick to surround them with love that will keep them uplifted and encouraged. And in instances in which our friends don’t get it right, we should extend them the same grace as God gives us daily.