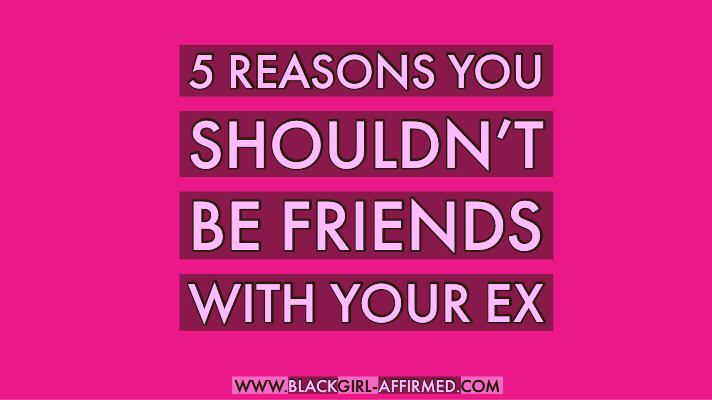 One day last week, I was talking to a male about the exes in our lives and he mentioned how he is still friends with all of his: I immediately called bull. I’ve only heard males say ish like this. It’s probably because they are so detached from their culpability in the demise of the relationship that they just think everything was all good. It also could be that women have been so adept at masking disappointment and heartbreak that he may not even recognize she’s hurt.

Recently I thought about entertaining the reentry of an ex in my life. Not in a romantic way, but a maybe we can be friends again and see where it goes way. But as history has proven itself in our relationship, I found myself confused and disappointed by his actions, and I realized ain’t ish changed. This solidified my belief that exes should remain in the past. Far back in the past and never resurrected. Think about your definition of friendship. Friends treat you the way you want to be treated and many times you’ll find that your ex treated you like trash. Below are my personal reasons why you can’t and shouldn’t be friends with your ex.

There’s no such thing as a mutual breakup. Contrary to what one may say or think, breakups are not mutual. There is always a person who wants the breakup a little bit more than the other and that’s usually the person who initiated it. Chances are if it is considered to be a mutual agreement, the other party may have only agreed to save face. Not having a bad breakup doesn’t mean you should remain friends. Just because the person dumped, graciously accepted the breakup and didn’t pour liquid laxative in your ice cube trays doesn’t mean the breakup was mutual.

You broke up for a reason. Don’t romanticize the relationship and only think of the good things. Think of it ALL. There is a reason why you’re not with that person. Whether it be trust issues or you’ve grown apart, it was decided that you were no longer good for each other. Chances are you won’t be good friends either. Write out a list of all the things that happened in the relationship. Not a pro and con list of the person’s traits but of all the good and bad that actually happened in the relationship. Often times, you will discover that he’s not worth the energy or effort to maintain a friendship.

Shifting from an intimate to a platonic relationship is hard to do. Seriously, how can you go from being sexually and emotionally connected with someone without absolving those feelings? They will always be there. If not for you then for the other person involved. There are things that happen within the relationship that change the dynamics of how you relate to that person. It will be hard to dismantle those feelings and shift the paradigm. If for either parties you would consider or entertain the possibility of having a sexual or romantic relationship if offered at any time, then you’re not ready to be friends.

You can never fully move on. If you’re still friends with your ex you can never have a moment to grieve and be ok without that person. You will always depend on your ex to provide you with the support you were used to receiving in the relationship. This is a precarious situation that can lead you into getting back into old habits. Habits that were the ultimate reason for the breakup in the first place.

Be aware of hidden agendas and false hope. Many fuck boys have the tendency of keeping you around for their own narcissistic motives with no real intention of ever bringing you back into their lives as a girlfriend. This can give you false hope and have you wading in the deep end waiting for a lifesaver. Also, be aware of the “good guy fuck boy”. This guy believes just because he is not beating you or calling you a bitch then his actions and behaviors didn’t hurt you. This person is completely self involved and not capable of being your friend.

Every relationship and situation is different. There could be that one example of exes remaining friends and it worked well for all parties involved. But I can show your several other examples of this crashing and burning. Take my advice, just let him go sis for your mental and emotional health. Don’t ever volunteer for the disruption of your peace.